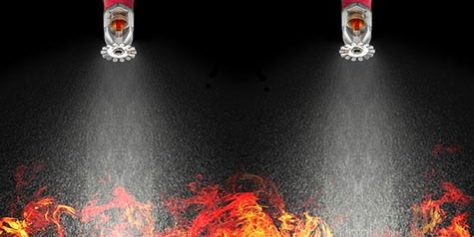 The flames of a fire have several different colors.  The colors in the flames represent the different substances that are undergoing combustion in the fire.  Hotter fires burn with more energy which are different colors than cooler fires.

Although red usually means hot or danger, in fires it indicates cooler temperatures.  While blue represents cooler colors to most, it is the opposite in fires, meaning they are the hottest flames.  When all flame colors combine, the color is white-blue which is the hottest.

Most fires are the result of a chemical reaction between a fuel and oxygen called combustion.  Temperatures gradually rise during combustion and flames occur once the temperature rises to the point for the fuel to vaporize and combine with oxygen.  A red glow is produced when temperatures are about 932°F.  Red flames occur at 1112-1832°F and turn orange between 1832-2192°F.  At 2192-2552°F the flames turn yellow and if they get hotter the flames become blue-violet.

Orange is the most common color for flames.  It comes from the burning of carbon which is found in wood, paper, charcoal, gas, etc.  When any carbon-containing fuel source is burned, minute carbon particles are released in the flame.  The particles are illuminated by the flames creating the appearance of orange flames.  As the fire burns, some of the carbon-containing fuel sources may not burn completely.  When some of the unburned carbon compounds are released into the flames the color is an orange-yellow.  This is a perfectly normal color for most traditional fuel sources and is the best colors for grilling and smoking meats with the greatest flavor.  Blue flames indicate that all the carbon has been burned and there is no particulate matter to illuminate.

Call Fire Control Systems today for your fire risk assessment!  We provide all fire safety services, instruction and training needed for your building.